Click on the link below to view/print the 2016 OFS Contract:

Re:     Ratification of OFS Tentative Agreement

We are pleased to inform you that the OFS Bargaining Unit has ratified the tentative agreement by 92% yes vote.

Due to the increase being put back to the pay period after contract expiration, causing a second increase in 2016 and receiving your raises earlier, you will effectively make as much as if we had negotiated 3.9% in January of each year of the contract.

$1,000 bonus first payroll period after ratification and an additional $1,000 payable in January 2019

We have agreed to an additional plan option. Please see attached.

Non-emergency care in the emergency room deductibles will increase from a $100 to a $200 deductible.

If an employee elects another plan besides the Premium Plan they will no longer be eligible for enrollment or reenrollment.

Company will contribute 250.00 into a Healthcare Savings Account (HSA) upon achieving wellness incentive.

No premium increases or plan design changes for retirees. 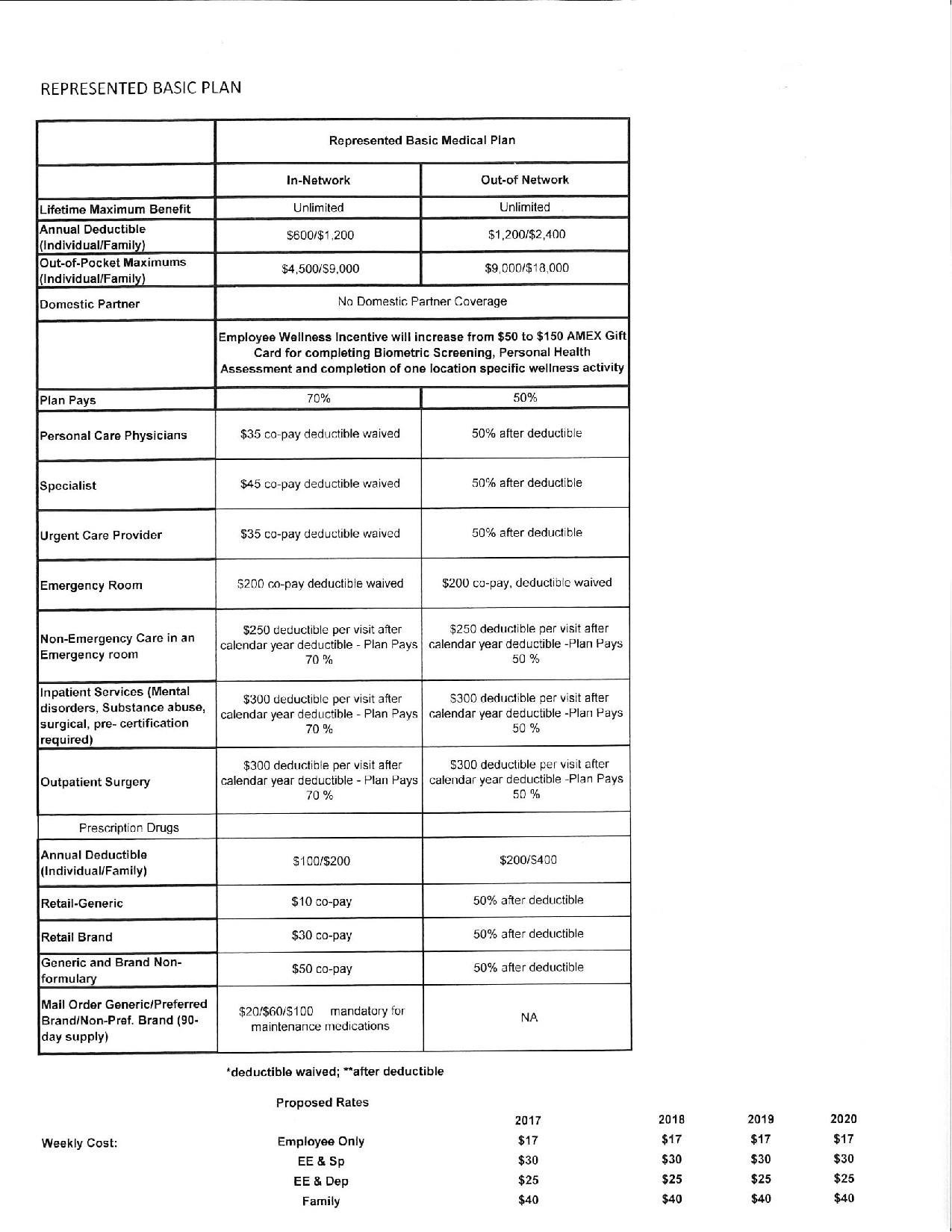 We have stopped the clock and will work under the existing agreement until June 29th 2016. We remain available to bargain in good faith when the company is.

The company has decided that you deserve no improvements. As a matter of fact, they think you should pay even more for a lesser medical plan. We have sacrificed in the bad years and now they want us to sacrifice in the profitable years as well. WE SAY NO!

Prepare Brothers and Sisters. Mobilize and show them we are ready to do what we must to get a fair contract!!

We met briefly with the company today and received a new wage proposal which was still not even close to what we need.  We told the company that we are not going to be abused any longer.  We need to share in the successes we produced for this company!

We are scheduled to meet tomorrow at 8am and expect the company to pass an acceptable wage proposal.

Be strong! Be safe! Be Mobilized!

Yesterday and today the company gave us their wage proposals. Even their revised proposals caused us to walk out of the room. We are worth more brothers and sisters and we will not insult you with the details. We will say, that will not take the same wage package when they just told us in a presentation about how much money they’ve made.

Later in the day we met and passed a counter on wages and we are meeting with them again tomorrow.

We would like to recap our proposals that they have rejected just because they “don’t like them” even though there is no financial cost associated.

So be angry brothers and sisters, management thinks you don’t deserve any of the profit you make for them. Just another example of corporate greed.

Keep up the mobilization – They must know we are resolute in this fight.

The Union bargaining committee met today to finalize the rest of our proposals and will be meeting with the company again on Monday.

Stay mobilized and stay strong and we will prevail!!

Brothers & Sisters, Today was the day the company showed its true colors. Management gave the Union a presentation about the millions of dollars in profits they made last year. We all thought that any respectable management team, who just received 26% bonuses, would have thought it was our turn to share in the prosperity that WE created. We received a healthcare proposal today which proved that the management at OFS is far from respectable. They have proposed to double all deductibles, reduce coverage by 15% and add $2000 - $4000 in out of pocket maximums. In some cases they want to double your premium payments by 2019. We all must get ready for expiration! Make no mistake Brothers and Sisters this company just declared war on its active employees and we have not even received their wage proposal yet. They have taken more than they should have and now they want more. If they aren’t going to respect our hard work and reward us with fair benefits and wages then we will be ready for WAR on this company!! Brothers and Sisters Mobilize, Enough is Enough!!

We met with the company again today and took turns rejecting each other's proposals. Their latest retrogressive proposals included raising the doubletime threshold from eight to twelve hours, prorating retiree vacation payouts, and forcing us to use our own vacation time for company imposed shutdowns.

The company stated, on the record today, that they will not even consider offering us any additional time off.  If they are not willing to add any flexibility to our agreement than they better be willing to offer us improvements financially.  That being said, we will be presented with their healthcare presentation tomorrow.

We helped them when they needed it and now its time they return back what we earned!

Stay mobilized!  We must fight both at home and at the table!

We met with the company today to exchange proposals. The company has proposed concessions on Holidays requiring you to work the day before and after to be paid for the holiday, changes to bridging language and the elimination of the Alliance program. The company does not seem to understand the concept of shared success after making 28 million dollars last year on our backs.

We passed proposals to add to holidays and increase holiday pay, eliminate any new subcontracting and add time off to take classes.

Stay mobilized Brothers and Sisters! We will keep you informed as bargaining progresses!

After two more days of local negotiations the table is closed and there was no progress to report.  While we were close on some issues they were ultimately tied to an attendance plan that, after significant review and consideration, we could not tolerate it in the plant.

Today the local table was due to close but we are not quite sure exactly what is happening now. The company closed the table but is "still looking to reach an agreement on it's proposals" as are we on our proposals. When we asked if "the proposals were going to discuss themselves" we were told that the company is waiting for direction from senior management before they could go any further.

We did, in spite of the questionable open table or closed table situation, come to a tentative agreement on Movement of Personnel. If there is an opening they will follow the same process they do now with the exception of the "shift bid selection sheet on file" language. The posting will go up including the vacant shift and the job/shift will be awarded by seniority as long as any other upgrade requirements, if applicable, are met.

The latest pass late Tuesday afternoon was a new attendance policy which, after review, would result in a termination if you were even one minute late 10 times in a year. We have requested information to review the impact of that proposal but the company was unable to provide it to us before the local table was closed...or whatever they tried to do tonight. We will let you know as facts are presented to us. Regional bargaining is scheduled to commence in Washington DC on May 16.

Yesterday the company finally showed their cards. After two days of "clean up language" the company passed us a proposal to cut your sick days from an 80 hour bank to 40 hours of earned time, modified holiday pay treatment, and verification of absence but they thought that if they offered to pay out 20 hours of it we would make the concession.  OFS is in a race to the bottom and trying to only provide you with the minimum as provided by Mass state law. Well, we aren't having that.

After rejecting the company's bare minimum proposal we proposed that there should be no discipline for using the 10 sick days, they should pay your co-pays and expenses when management asks for a doctors note, and they pay out any sick time hours you do not use. Needless to say, they seemed unhappy with our proposal, surprising emphasis was placed on the fact that they could not discipline.

Brothers and Sisters, we are worth more than the bare minimum. We resume negotiations on Monday and are scheduled to recess the local table on Wednesday due to an artificial deadline imposed by the company. In solidarity, wear red on Tuesday and we should do informational picketing on lunches to let them know what it will look like if they continue to insist on their ridiculous concessions at the regional table as well.

On Monday, April 11th, bargaining will begin in Marlboro.

Every member should wear RED shirts on MONDAY, APRIL 11TH to show our UNITY!

Also on Monday, April 11th, we will be conducting INFORMATIONAL PICKETING in front of the building to ask the Company for a fair contract and we need every member to participate between 11am-1pm.

Our Brothers and Sisters at Norcross in Atlanta, Georgia will be supporting our first day of bargaining and we are asking you to support them as well.

Their first day of bargaining is slated for Tuesday April 19.

Reason why we wear RED: http://www.cwalocal1400.org/red.shtml

Welcome to CWA Local 1400 - We are thrilled you have chosen us to represent you!

We'd like to give you some basic information about our Local. We have an Executive Board that currently consists of (10) Board Members:

Elections are conducted every (3) years for these positions. The next term begins January, 2014. There is currently an election in progress for the District 2 position. There will also be a new District 4 VP, Tammy Gerrish. All the Officers and the other District Vice Presidents will retain their positions for the new term.

As part of the merger with CWA Local 1365, a Member from OFS will be voted in to be a District Vice President, which will give them a seat on our Executive Board for this new term.

Our Executive Board meets monthly at our Union office in Portsmouth, NH to discuss workplace issues as well as National Union issues and agendas. We hold Membership Meetings for all 1400 members bi-annually every April and October.

To keep all CWA Local 1400 Members informed, we use a National email system (called Salsa). Being a part of this email list is not mandatory; however it is the quickest way to get information to all of our members. A Union official will be requesting contact information from everyone shortly.

Gale Clay is our Receptionist, an IAMAW Local 256 member.